Ok, so there was no beer but there was plenty of mud, and a bit of blood!

This last weekend I was able to run in a local race called EarthWindFire. It is basically a local version of a Tough Mudder using some of the unique terrain of the desert for some of the obstacles. We have been working on a new material to use as a footbed for our sandals. One of the goals for the new footbeds is to prevent slippage between the foot and sandal while wet. Since I would be sledging through mud and water at this race I thought it would be the perfect place to test the new footbed. While I was in experimental mode I made a new prototype of the Pah Tempe sandals with some design changes.

It would be a risk to run the race with untested sandals that were only slightly broken in, but I wasn’t really in it to win anyway. The descriptions of the race seemed to be inconsistent and this is the first year so I really didn’t know what exactly to expect. I made sure to train by bear crawling, balancing, and climbing. Other than a bit of snow a few weeks back our weather has been too dry to really train in mud. There was a 5K, 10K, and mountain bike division. I signed up for the 10K.

As I stood in the rain, trying not to shiver at the starting line two things became obvious, 1. Everyone was nervous and cold, and 2. nearly everyone was pointing at my feet and whispering to each other. I assume they were making bets on how long I would last! I got a lot of skeptical looks but nobody actually said anything to me. I just smiled at them knowingly.

As the race started the trail immediately dropped steeply into a rocky slope. Since that is the usual terrain I run on, I passed most of the crowd. There were just three guys in front of me at that point. The first obstacle was described on the website as, “a muddy trench covered with barbed wire”. The description on Facebook replaced “barbed wire” with rope. In reality, it was a sandy wash with caution tape strung overhead. As the three guys in front of me began crawling through it I passed one of them. It was obvious that he hadn’t done much crawling. Another guy went though it quickly but stood up too early and got caught in the tape. Suddenly I found myself at the front of the pack with only one guy in front of me.

The next obstacle was about a thousand heaps of dirt two to three feet high. They kicked my butt! I tried to make the most efficient route through them but I didn’t do a very good job. I’m used to very natural terrain and this was not something I expected. Later on in the course they had large mounds of dirt and they were much easier for me to climb.

The course went through a dry creek wash for a while and then dropped right into a natural mud pit in the creek where the rain water had accumulated. I suspect that wasn’t a planned obstacle but the directors took advantage of it. After that the trail veered into a different wash for a couple miles before the next obstacle. I could hear two people coming up on me. As they passed they asked if there was anyone ahead of me and if so how far away. They were out to win. I gladly moved over and let them pass.

Next came the tunnels. This was the absolute worst obstacle for me! It was a series of small pipes that you had to crawl through. The problem was that it was so tight that there was no room to crawl. Maybe it was just because I’m very long. I couldn’t even do an army crawl so I was reduced to diving into the pipes as fast as I dared to slide on my belly. Then I had to wiggle like a worm on a hook until I could reach the end of the pipe and pull myself through. The course was only 5K so the 10K racers just did everything again. The second time I got to this obstacle was even harder because I was wet from head to toe and instead of sliding on my belly, I screeched to a stop almost instantly!

Soon after that came the climbing wall. I had trained for this one so I was excited. I was a little disappointed when I saw that there were plenty of ropes to climb and there were also hand and foot holds everywhere on the wall. I was expecting to take advantage of my tall stature, freakishly long arms, and high jumping legs. It didn’t matter, I was able to hop up and over the wall quickly. The second time I got to this obstacle there was a runner who had just passed me. Once we got to the wall I was able to get up it much faster so I passed her. Instead of carefully climbing down the other side of the wall like the other racers, I just dropped down. The first time worked like a charm but the second time I ran into something unexpected. There had been a small tree or bush that had been cut down. The stump was only about an inch in diameter and had been cut at an angle creating a sharp spike sticking out of the ground. Had I not spotted it before I landed it would have gone through my hand. Luckily I saw it just in time to rotate my hand and allow for more of my body weight to go to my other hand and into a roll. It still got me in the hand but was a much less serious wound than it could have been.

I was lucky! It didn’t bleed much because I was freezing and blood drew in from my extremities once I was done running.

After a long section of trail there was another spot where you had to crawl under caution tape and then up a hill through some boulders and down into a motorbike park. The trail up to that point had been awesome. Most of it wasn’t really a trail at all but just following flags through the desert. The motorbikes were noisy and fumes were all over in the air. (Other than the terrible marketing, this was my largest complaint about the race.) Eventually the trail veered back into the wild and away from the bikes. This was nearing the end of the course and there were several natural obstacles like a large crevice in the ground and steep hills to climb. There were also large mounds of dirt to climb and then you ran down the hill to my favorite obstacle: a 100 foot long slack line over the edge of a muddy pond. While the surface water wasn’t clean, the muck underneath was a black, smelly, slimy mud that gathers under a layer of sand. The first time that I came to this obstacle I had just been passed by a couple running together from the local CrossFit gym. They were both trying to cross the slack line together so I decided to jump on as well. 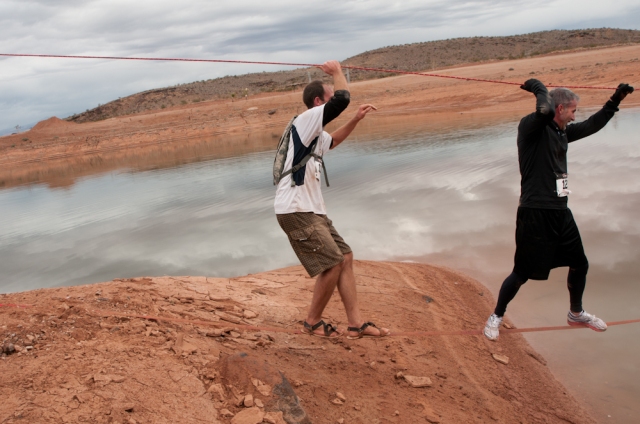 While the female runner was doing pretty good the male in front of me was having a harder time. 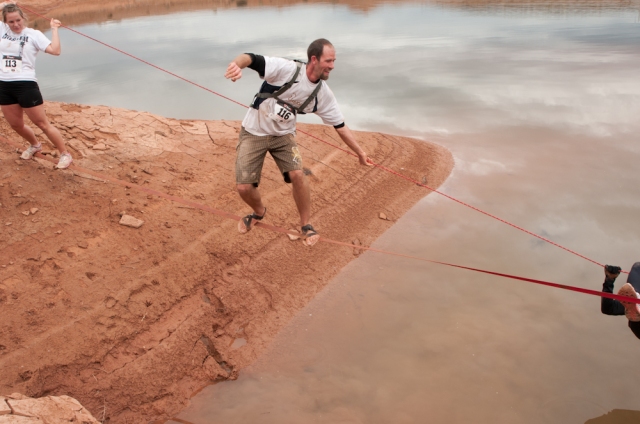 If you look closely you can see that he had fallen but wouldn’t let go of the rope. The rope was designed to assist runners but I noticed that when people relied on it too much they ended up in the mud. The rope stretched more than the webbing so his head and upper body were about a foot lower than his feet which were still clinging to the line! He kept moving forward in this position! I couldn’t believe his persistence. I had let go of the rope at that point and was still moving forward but I had to wait for him. Finally I told him he could go faster by simply hanging upside down on the slack line and letting go of the rope. We both scrambled quickly across the line upside down. All the people gathered around were cheering us on but the volunteers from the National Guard were disappointed because they were hoping we would fall.

The second time I went through we all just decided to wait for one another and cross standing up. It was more energy efficient but I have to admit it was much less fun. I was also very temped to start bouncing on the line to knock the runner in front of me into the water! 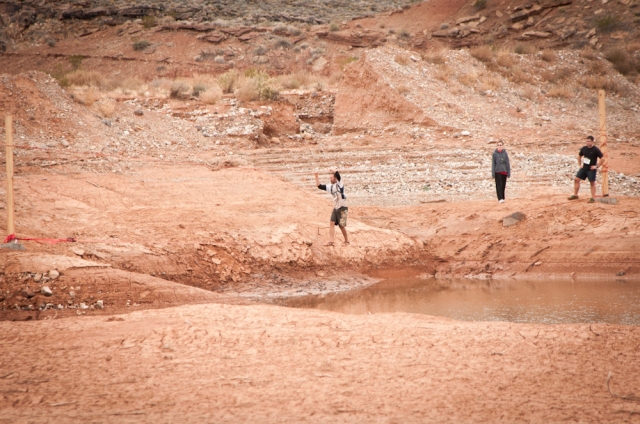 I was careful not to rely too much on the rope but it was right in my face so I had to hold it up and out of my way.

After the slack line they make you slosh through mud anyway. I noticed that people were trying not to get too dirty so I crawled through the mud on all fours and tried to get good and covered.

After another hill or two, the very last obstacle was just a muddy pond that we had to wade through. I sprinted and leapt into the pond since it’s faster than trying to slosh in deep water.

My sister took the pictures and I think that my leap took her by surprise. Thus my head is not included in this photo!

I’ll be honest, I struggled the first half of the race. After only a half mile I was already cramping. I wondered if I had not eaten breakfast early enough. I made sure to eat something that I knew I could digest well enough, but I think that on that particular day it didn’t. I kept running but my tummy wasn’t comfortable. I rarely have that problem when I go out running so it surprised me. Once I was able to let out a few gas bubbles (sorry) I felt much better, so I was pretty excited to run the course one more time. The second time around went much better other than the part where I jumped down onto a spike.

I was happy with how the new footbed performed. There were some slippery sections of black gooey mud but I expected some slippage there. The sections where the mud was more wet the sandals stayed put just fine. I did cinch them up pretty tight and the straps were bothering me a bit by the end of the race, but it was a pretty gnarly race for sandals! The skeptical looks turned into amazed smiles as I finished with the sandals. Many of the skeptics were sill behind me somewhere though.

The weather was fine for running. It rained right up until the point where we started running and then it stopped. The air was cool but there was no wind! Once I was done running I started to shiver and I got pretty cold. Once I get wet I shake like a dog. I waited around for a little white to see a few other runners cross the line, and a couple of mountain bikers that had gotten lost on the course came through as well. Eventually I got too cold and decided to go wash and change into dry clothes.

Although several people passed me I was able to keep up pretty well for a slow runner and inexperienced racer. The sandals worked well and I got the feedback I needed. I had a ton of fun! I called it a successful run and returned home.